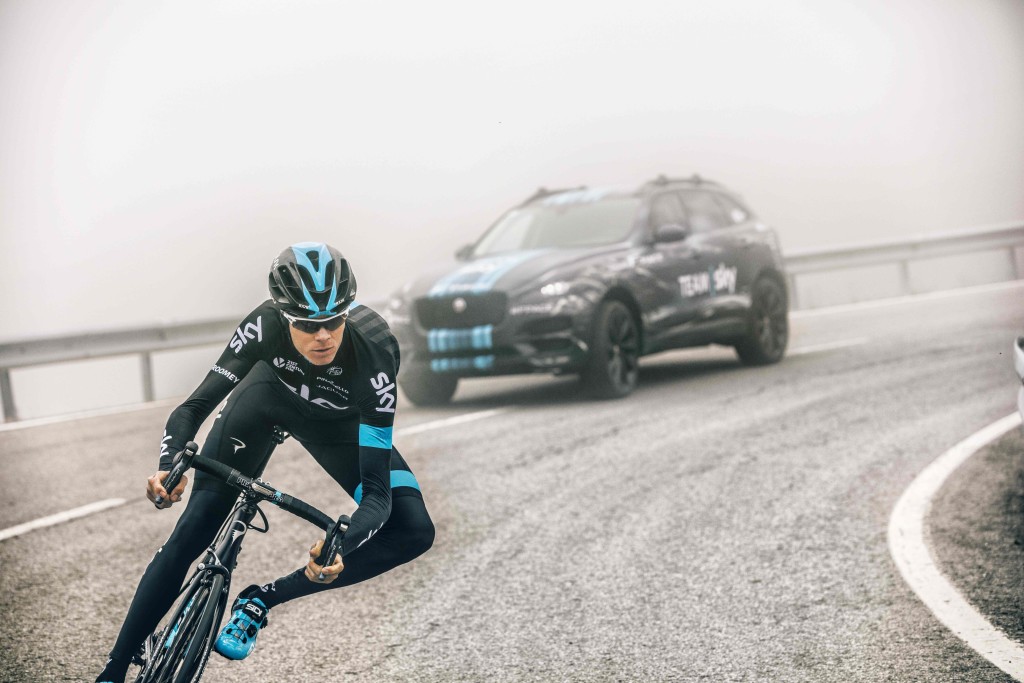 Wednesday 1 July 2015: Jaguar will set the pace for Team Sky this Saturday when a prototype version of the highly anticipated Jaguar F-PACE will support the team at the Tour de France Grand Depart in Utrecht.

Jaguar’s first performance crossover is due to be revealed later in the year and is in its final stages of development. Part of final testing included sending a prototype to Team Sky rider Chris Froome’s La Pierre-Saint-Martin training camp as a real-world test of the Jaguar crossover’s performance, durability and clever packaging. The team then chose the same car to support them during stage one of the Tour de France – their most demanding and high profile event.

The job of the support vehicle is to carry a crew of up to four people including the Team Sky Sports Director, doctor, mechanic and another senior team member. The wide, spacious cabin of the F-PACE accommodates the crew in complete comfort while the boot space is the largest in class to help carry the team’s equipment including drinks, energy gels, clothing, tools and spares for the bike.

The F-PACE Prototype will support Chris Froome on the first of 21 stages, the individual time trial, which starts at Utrecht in the heart of the Netherlands on Saturday, 4 July. The time trial heads south towards Belgium over a twisting route of 13.7km; the riders setting a blistering pace and pushing themselves to the limits of endurance even at this early stage of the competition.

The training camp was the location for the first in a series of short films, which give an insight into the rigorous testing and development of F-PACE prototypes around the world.

The film captures Froome being followed by the Team Sky F-PACE on a Tour de France recon tackling one of this year’s grueling climbs, as the 2013 Tour winner prepares to mount his challenge for a second yellow jersey in Paris.

Froome, said: “The F-PACE is awesome. It has all of the same high performance road dynamics and support package the team gets from its Jaguar’s vehicles, only this time in a performance crossover. It’s going to create a huge impression in Utrecht.

“Team Sky is built around performance, and Jaguar’s engineering expertise and technological innovations, especially over the last 12 months co-engineering the Pinarello DOGMA F8 and DOGMA K8-S bikes, consistently helps get the best out of the team. I’m sure the F-PACE will be no different.”

Froome added: “The tour is everything to me. There’s something special about it. The hype, the passion, the crowds. Everything is completely overwhelming. I can’t wait to get on the road now and get into the race. I’m back with a vengeance this year.”

“We are delighted to be supporting Team Sky again at such a prestigious sporting event and are excited at the prospect of the F-PACE being seen in action in public for the first time”, said Kevin Stride, Vehicle Line Director, Jaguar F-PACE.

“The Jaguar F-PACE is a striking balance of performance, style and practicality,” he continued. “And what better way to showcase the vehicle’s attributes than on this crucial first leg of the Tour de France.”

To mark the reveal of the Team Sky F-PACE and because the car is under wraps until its global reveal later in the year, Jaguar has produced a special camouflage. The soft wrap reflects the performance and design of both the F-PACE and Team Sky and has been inspired by the Tour de France and road racing bikes. It depicts unique carbon textures, rubber and chains interspersed with the iconic Team Sky design to create a stunning, rich, layered effect which will keep the exact design details of the F-PACE secret until later this year.

Jaguar’s Team Sky F-PACE Prototype will only support the team on stage one of the Tour de France in Utrecht on Saturday July 4.